<<< Back To Norcross Real Estate & Homes For Sale

About The City Of Norcross, GA. 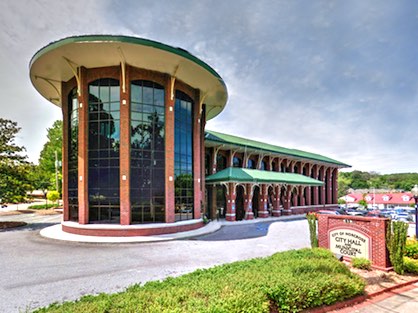 The history of Norcross reaches back to October of 1870, when the area was first chartered as a town. Both the Creek and Cherokee Indians lived on the land that would eventually become Norcross, and a trail was developed on what is now Old Peachtree Road.

Eventually two American forts were built during the war of 1812, and they used these same trails as an easy way to travel between the two buildings.

In 1840, the trail had become a major stagecoach route that connected South Caroline and Alabama; thus, the surrounding communities grew. The railroad entered the picture in the late 1860s and brought with it the development of now historic Norcross, known as Gwinnett County’s second oldest city.

This railroad is still used today, running parallel to Thrasher Park, and historic Norcross is a favorite destination for many. Shops and restaurants line the street, as well as some historic homes, businesses, and parks. Norcross itself has grown outwards to include areas from I-85 to the south, Jimmy Carter Boulevard to the west, and Peachtree Industrial Boulevard to the north. Numerous corporations call Norcross home, and residents are just as loyal. From numerous parks to amazing annual events, Norcross is one of Atlanta’s favorite cities.

For such a small city, Norcross has an amazing number of parks available to both residents and visitors. Some of the city's great parks include:

If you drive along Holcomb Bridge Road or South Peachtree Street, you’ll find yourself in the quaint square of Historic Norcross. Numerous shops and restaurants are available to visitors including Dominick’s, 45 South Café, Iron Horse Tavern, and Mojito’s Cuban American Bistro. Several boutiques call Historic Norcross home, as well, including Chalk It Up Norcross, Details Boutique, and Taste of Britain.

There are also several live music venues and special event venues available for any special occasion. If you travel a little further onto Buford Highway, you’ll find plenty of delicious ethnic foods and shops, from South American to Latina to Asian.