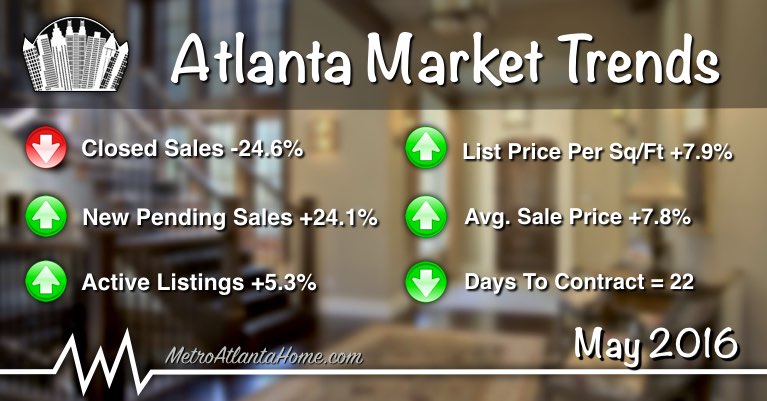 The big story this month has to be the massive drop in closed sales during the month of April. Not only was this uncharacteristic for this time of year, but definitely unexpected given the massive jump in pending sales the past three months. There is obviously something going on that is preventing all these under contract properties from making it to the closing table.

Other than closed sales being way down, all other market trends indicate we are in one of the strongest seller’s markets we’ve seen in nearly a decade. However, I think this seller’s market is so strong that, it’s actually preventing homes from selling. In a blog post I wrote a couple weeks ago, I explain how bidding wars can actually hurt home sellers.

In a market where seemingly every property goes under contract in days, it’s hard to believe that closed sales are down nearly 25% from where they were last year. We saw signs in March that closed sales were declining (down 3.6% YOY), but the huge drop in April was unexpected. Some will argue that there are less properties on the market, therefore, not as many are selling. However, the actual number of properties under contract (not percentage) is much higher than it was last year.

So far this year, pending sales have been through the roof! As you can see in the chart below, year over year new pending sales were up 8.3% in January, 26.8% in February, and 26% in March. In April, there were 9,672 new pending sales, representing a 24.1% increase over April of 2015. However, the increase in the total number of pending sales was even more significant, jumping 57.7% year over year to nearly 16,700 properties under contract. This is a huge contributing factor to the lack of active inventory, and should result in a huge increase of closed sales in the coming months… if buyers and sellers can make it to closing.

Active Inventory Up 5.3% From March

The number of active listings was up in April compared to a month earlier, but it wasn’t because of a jump in new listings. In fact, new listings remained fairly stable at around 12,100, but the drop in closed sales meant more properties were still "on the market". Compared to last April, active inventory was down to 24,700, nearly a 10.5% drop. The five year average in April is roughly 27,500 listings, so we’re still around 3,000 listings under where we have been in the recent past.

This month, things seem to be at one extreme or the other. While the influx of new listings is welcomed, properties are still going under contract so quickly it doesn't allow the active inventory to grow much. This demand has caused the median sale price to rise along with the list prices, as you can see below. Despite the higher list prices, sellers are still getting 96.8% of their original list price, and properties are closing in a mere 65 days! 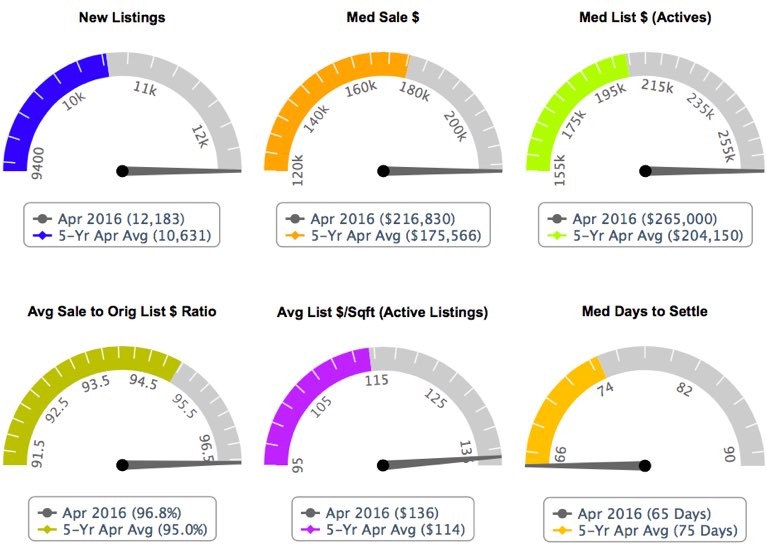 As it has since last December, the median asking price of new listings in Metro Atlanta increased in April. Now up to $109 per sq/ft, the median list price increased 7.9% compared to April of 2015. As you can see from the chart below, the median list price for all active listings starts to increase in January with anticipation of the spring buying season. Despite the jump in prices, buyers have demonstrated they are more than willing to spend what it takes to get the house they want. Rising list prices, along with bidding wars caused by elevated buyer demand, will surely result in price appreciation in the coming months.

The combination of low inventory and high buyer demand has definitely benefited sellers looking to get a premium for their property. As you can see in the chart below, prices start to rise this year, and they've already surpassed last summer's high of $270,715. In April, the average sale price reached $274,823, a 7.8% YOY increase! This hot market should continue to yield increasing home prices as we head into the summer months.

Median Days To Contract Bottoms Out

Last month, closed sales were way down in Alpharetta, dropping nearly 39% year over year. New listings were up 6.9% YOY, and pending sales were only up 6.1% in April. The shortage of active listings in previous months helped drive prices up to just over $395K in the first quarter of 2016, and resulted in the median days to contract dropping to 16.

Median Days To Contract In Brookhaven Falls To 9

The number of homes for sale in Brookhaven was up 5.6% compared to April of 2015, yet closed sales were down 31.6% compared to the year prior. There were 174 new listings that hit the market in April, representing a 13.7% increase YOY. Average sale prices in Brookhaven topped out just short of $490,000 in the first quarter of 2016, with average list prices at $211 per sq/ft.

The housing market in Chamblee has been hot, with average sale prices increasing 12.2% to $325,332 in Q1. Active listings were up 8.6%, but closed sales in April dropped to 26, nearly a 47% decline. However, new pending sales were up 43.2% compared to last year, and the average list price per sq/ft for new listings was up 15.9%. The median sale price to original list price ratio dropped only slightly to 97.5%.

Active Listings In Dunwoody Down 10.7%

Having been down double digits to start the year, the year over year percentage change in active listings was only down 3.4% in April. New listings increased 8.8% compared to last year, and new pending sales were unchanged. However, like the rest of Metro Atlanta, closed sales in Johns Creek were down more than 32% compared to the prior year. Average sale prices in Q1 skyrocketed to $399,088… more than an 18% increase from Q1 of 2015.

Number Of Homes For Sale In Roswell Drops 19%

The Sandy Springs real estate market showed some signs that things might be slowing down. Active listings were up 5.8% compared to last year, and closed sales were down 47.6%. New listings were up 32% YOY, however, new pending sales remained flat. The average sale price was up compared to the year prior, but declined from Q4 of 2015. The median sale price to list price ratio was also down 0.4% YOY to 95.9%. However, the average list price per sq/ft of new listings and new pending sales were both up 11.3% and 4.6% respectively. 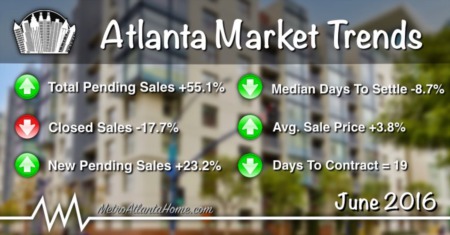 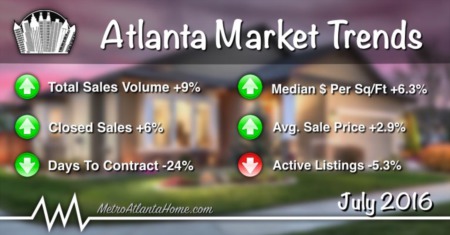 As we approach the end of the summer, the Atlanta real estate market continues to favor sellers. Sale prices have continued ...