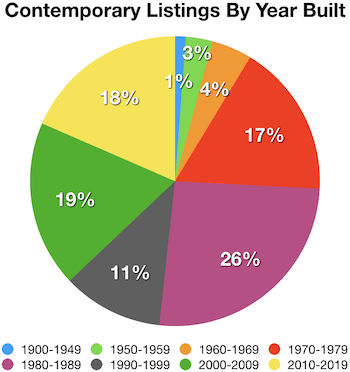 Contemporary homes have been fairly prevalent in the Atlanta area since the 1970’s. There’s been a resurgence in their popularity, so we’re seeing more and more of them being built. As you can see in the chart pictured here, about 26% of the recently listed homes in the metro area were built during the 1980’s… a very popular decade for this architectural style. Although today’s contemporary homes often look considerably different than those from the past, they still incorporate many of the same characteristics that make this style of house so unique and instantly recognizable.

One thing you’ll notice when looking through the homes for sale on this page is that some of the listings don’t actually feature a modern or contemporary architecture. This happens when the listing agent mis-categorizes the home’s design style when they enter it into the MLS. Many agents simply don’t understand the basic differences between the various architectural styles, so they end up choosing the wrong one. However, in some cases, a home’s interior design heavily incorporates modern decor and/or finishes, therefore they’ll categorize it that way. Unfortunately, our listings filter is unable to fix human error.

The growing popularity of this home style, in combination with its aesthetically pleasing appeal in photos & television, makes it a popular choice for movies, commercials and photo shoots. It’s almost a weekly occurrence that we get a call from a location scout inquiring about the availability of contemporary listings for a project they’re working on. If the property is vacant and not under contract to close in the near future, the homeowner may get a sizable payout in exchange for a few days use of the property!

Where To Find Them

As I mentioned before, many of the “contemporary” style listings in Metro Atlanta are really just traditional style homes with modern finishes. This makes it rather difficult to visually map where to find these types of homes. However, depending on whether you’re looking for a mid-century modern, a contemporary of the 1970’s & 1980’s, or something more recent, here are some of the locations you may want to focus on:

You’ll find most of your mid-century modern homes in areas like Decatur, Avondale Estates, East Atlanta, Druid Hills, Tucker, and parts of Buckhead (especially the Chastain Park area). Many of these unique homes have been beautifully restored and updated to enhance their original architectural details and design. Flat roofs, tons of windows and an open living concept helps meet today’s lifestyle needs while preserving the integrity of the modern era.

Starting in the 1970’s & 1980’s, construction of cedar siding contemporary style homes became very prevalent in parts of Metro Atlanta. Entire neighborhoods of them popped up in the East Cobb area. These houses were hugely popular at the time, and most of them can be found in cities of Marietta, Kennesaw, Woodstock and Roswell. They’re instantly recognizable by their overlapping angular roof lines, cedar siding hung with opposing diagonal patterns, and use of stone accent walls.

Almost all the newer contemporary homes (built after 1990) will be found inside the perimeter. Areas like Druid Hills, Kirkwood, Virginia Highland, Old Fourth Ward and neighborhoods surrounding the Beltline have been a hotbed for this type of home in recent years. Often found in gentrifying neighborhoods, developers will purchase old dilapidated homes, knock them down, then construct an elegant modern home in its place. Modern design is also common in many of the new townhome developments cropping up throughout hot intown locations.

About The Contemporary Home Style 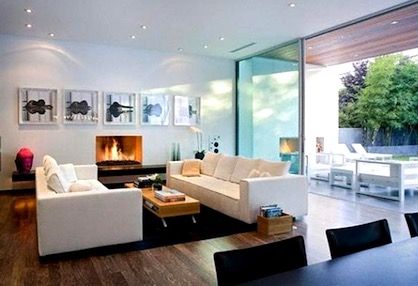 Though the term contemporary refers specifically to architect designed homes built from about 1950 to 1970, the term describes a wide range of houses built in recent decades that still remain popular even today.

Asymmetrical structures, large expansive windows characterize contemporary design. People are drawn to them by their open and simplistic nature, making them an especially popular choice for events like the Atlanta parade of homes - an annual showcase where builders exhibit their work during public home tours.

Though they reached their peak in the 1970s, the style seems to be making a comeback in many areas of Atlanta, especially intown. We're starting to see more and more contemporary homes randomly popping up in transitional areas and neighborhoods near Downtown Atlanta; though many of them are quite expensive.

Since the terminology seems almost interchangeable, you may be wondering, is there a difference between contemporary style and modern style homes? There is! The most basic point of differentiation is that modern architecture refers to a specific time period of building design (1900-1950’s) that’s unchanged, while contemporary architecture is more current and can evolve based on ever-changing trends. Here are some of the more distinguishing features you’ll find in each of them:

Modern homes typically feature a simplistic cube-shaped design (often with a flat roof) built with materials such as concrete and exposed steel… reflecting the modernism era of the 1940’s-1960’s. Lack of symmetry, wide open floor plans and extensive use of glass walls & windows made modern houses notably different than nearly all traditional architecture at the time. This gave them a very “futuristic” look. There’s usually minimal furnishings and a monochromatic color scheme; resulting in a more stripped down appearance.

Contemporary homes are often based on general stylistic characteristics of modern homes, but also incorporate certain aspects of past and current architectural trends. Contemporary homes usually offer more variety in color scheme and building materials, while also implementing forward-thinking design concepts. Depending on the architect, inspiration for a building could be gleaned from many different types of architecture, but could also manifest from the individual’s own artistic imagination, since design constraints are not an issue. 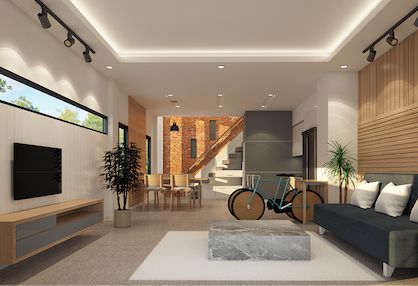 Though some of the original contemporary designed homes were very pricey due to having to hire expensive architects and designers, they can now be found and built less expensively with better planning and design. A wide range of house plans are availble for purchase online. With countless designs and concepts to choose from, these blueprints can often be modified to suit an individual's needs. Of coarse, if you're looking for something truly unique, don't expect it to come cheap.

Contemporary home design reflects today’s lifestyles, with open floor plans, areas designed to flow into one another, and the inclusion of multi-use spaces, such as great or family rooms. The flexible layout is ideal for a family’s changing needs. You’re sure to acquire a property that is unique - a home that will flow along with you.

Simplicity is the most important design aspect of contemporary homes. Though they’re simple, the abundant light and windows result in warm, inviting spaces that connect with the outdoors. Since they’re very open and minimalist, storage can be a concern in the contemporary design. These houses do not typically have attics, since the roof is flat, so a common place for storage is under the stairs.

Possibly one of the most well known contemporary style American architects was Frank Lloyd Wright (1867-1959). His revolutionary approach to modern architecture was reflected in both the buildings he designed and the way he lived his life. In addition to being a world renowned architect, Frank Lloyd Wright was also a writer, educator, art connoisseur, community planner, and interior designer. His practice of creating structures that seamlessly blended with the surrounding environment birthed a design philosophy known as “organic architecture”.

Credited with designing over 1,000 structures in his lifetime (about half were actually built), his concepts were absolutely groundbreaking for the time. He believed in necessity and simplicity when it came to a building’s floor plan and decor, but also focused on using materials that would complement the project. Throughout his career, his designs evolved and unique sub-styles emerged in the buildings he created. Even today, we frequently get calls from people looking for contemporary style homes inspired by his works.