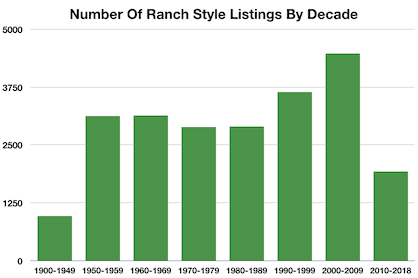 If you’re looking to buy a ranch home in the Atlanta area, you’re in luck. These single level homes are the second most prevalent architectural style in the Metro area. At any given time there may be thousands of properties to choose from, so there’s no shortage of options available.

Most of these houses were built after 1950, with peak construction occurring throughout the early 2000’s. Generally speaking, older homes are located closer to the city, while newer ones can be found in the suburbs (see map below). We analyzed recent active/pending/sold listings on FMLS and broke down the number of listings on the MLS by decade.

As you can see in the chart pictured here, there are very few homes listed that were built in the 50 years prior to 1950. However, starting in the 50’s and 60’s, this became an extremely popular home style. Then, throughout the 70’s & 80’s we started seeing other home style come about, with two-story traditional homes being a very popular option. Construction in general really took off in the 90’s and early 2000’s with the booming economy and a massive population influx… and once again ranch homes were part of the mix.

Where To Find Ranch Homes In Atlanta (Newer vs Older)

Map Of Homes By Year Built

Please Note: The comparisons shown above include ranch style homes sold throughout Metro Atlanta as of July 2018 (12 months prior). The 9,877 properties shown here were listed and sold on FMLS. Keep in mind, this represents only a fraction of the total ranch style houses in Atlanta, but it does provide a good visual representation of where the newer homes can be found compared to older ones.

On the left side of the image you’ll notice a higher percentage of homes located inside the perimeter, or in areas just outside of it. Many of these older neighborhoods predominantly feature the same style of home; since there weren’t many variations being built at that time. Many of these in-town neighborhoods are in convenient locations, so these older homes are often gutted and completely renovated, or, in some cases, purchased as tear-downs and replaced with newer, larger homes.

As you can see in the map above, there are neighborhoods with high concentrations of ranch homes in areas/cities such as: Chamblee, College Park, Decatur, Druid Hills, East Cobb, East Point, Mableton, Marietta, Smyrna, Stone Mountain, Tucker and West Atlanta.

More About The Ranch Home Style 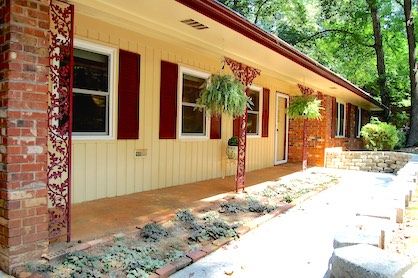 The ranch is a domestic architectural style originating in the United States during the 1920's. The ranch fused modernist ideas and styles to create a very informal and casual living style.

Their popularity waned in the late 20th century as traditional and historical décor became popular. But the ranch is once again making a comeback, due to the functionality and streamlined aesthetic.

One of the benefits of owning a ranch style home is the variety. Though traditionally one story homes, the design itself varies immensely and leaves room for customization, appeasing even the most discerning palate.

The ranch style was first introduced in the 1920s and grew in popularity with the middle class; the demand for housing, post war, was increasing and ranches were the best style to suit those needs. The ranch style echoes the Spanish colonial architecture of the 17th century. Single story floor plans are key in the design, with open, easy to navigate living spaces. The 1950s through the 1970s saw a large growth in ranch style homes, either with traditional layout or more modern, open style layout. 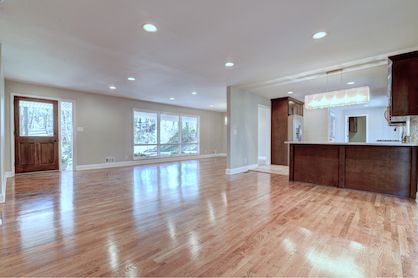 A popular appeal of the ranch is the ability to easily renovate and add additions for more living space. Very often, you’ll find that homeowners add a second level to the home to separate the living areas from the bedrooms. The rear of a home can often be expanded for a larger kitchen and great room. The attic level can also sometimes be made into a second floor with dormers, provided there is adequate height, while a basement can provide an abundance of space when finished.

They’re also a favorite among home flippers, so you may even find an older home already retrofitted with modern design and finishes. A lot of the newly renovated homes you’ll come across have had multiple interior walls removed to really open up the floor plan. Cosmetically, a ranch can be easily updated and transformed by adding new gables to the front exterior to bury the roof line, installing new windows, and changing the siding.

Depending on the geographic area and finishes, the ranch can vary greatly in price; however, they can be quite affordable. There’s a renewed interest in this style home due to the benefits of living all on one level, which is appealing to seniors, on the go families, and those caring for aging parents. Furthermore, the interiors of the ranch style houses are designed to be quite spacious, clean, and airy, which makes them easy to clean.

Though new builds of ranch style homes are waning in popularity, the ranches of the early and mid-20th century are being remodeled and made new again. So if you’re searching for easy to navigate living space with mid-century charm, a ranch style home is for you.