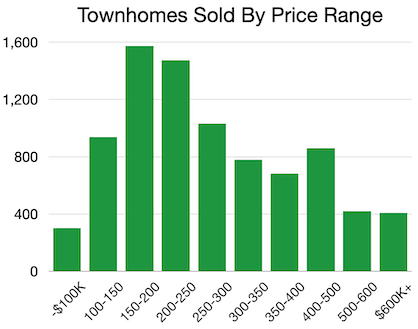 Finding townhomes for sale (or rent) throughout the Atlanta area is not a problem, and there are plenty of opportunities available for home buyers with nearly any budget in mind… Especially those seeking a more affordable option. In fact, from June 2019 to May 2020, the highest number of townhouse sales in Metro Atlanta occurred in the $150K-$200K price range! For a frame of reference, the average sale price of all single family detached homes during the same period was around $323,000.

The chart pictured here breaks down the number of sales, grouped by sale price. You’ll notice the price ranges are smaller between $100K-$400K ($50K increments vs $100K). This was due to the disproportionately high number of listings selling in those price ranges, compared to everything else. Once you get over $500K, the number of units sold dropped off sharply. However, construction of new luxury townhouses has been more prevalent in recent years, so we should see these numbers creep up in the future.

Where Townhomes Are Typically Located

Townhouses can literally be found all over the metro area, but they tend to be located off major roads and near commercial developments. This can be appealing for those looking to be walking distance to shopping, dining and entertainment districts. Acquiring the land to build these communities can be expensive in parts of Atlanta, but due to the townhome’s small footprint, builders can fit more dwelling units per acre of land. This provides opportunities for buyers to purchase a home in areas that would otherwise be too expensive for them to live.

Townhome communities have been a popular choice among buyers throughout the Atlanta area for decades now. They started popping up in their current form around the 1960’s, but there wasn’t a major uptick in their construction until the 1980’s. However, the boom of the 80’s pales in comparison to what took place starting around 2001. As you can see in the chart below, the housing stock was measured by decade, up until the early 2000’s. That's when production ramped up significantly, resulting in more units being built in a single year than there were during entire decades of the past.

Number Of Townhomes In Metro Atlanta By Decade/Year Built 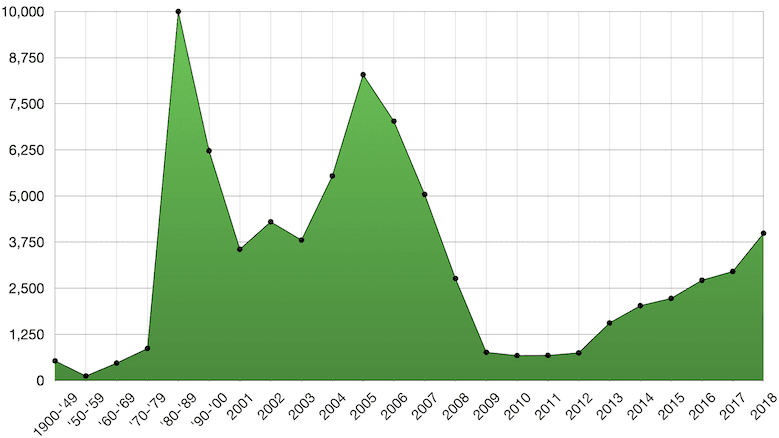 It’s hard to believe, but there were about the same number of townhomes built in the year 2004 as were built throughout the entire 1990’s. In 2005, Atlanta home builders constructed over 8,200 new units… That was just 2,000 units shy of what was built during the full decade of the 1980’s when townhouses were being built like crazy. However, we know how the story ended when oversupply, among other things, crashed the housing market in 2008. New construction was largely halted from 2009-2012, but has since started to rebound.

We’ve started to see modern design prevalent in many newer townhouse communities, especially at higher price points. Builders often construct their units with high-end finishes, wide open floor plans on the main level, and room for an office/guest suite/media room on the lower level. Roof top decks and sky terraces have become popular, as well, especially in communities near the city where skyline views are available from the rooftop. Many neighborhoods are also offering outdoor amenities such as: walking paths/trails, community green-space, dog parks, and of coarse, pools and clubhouses. 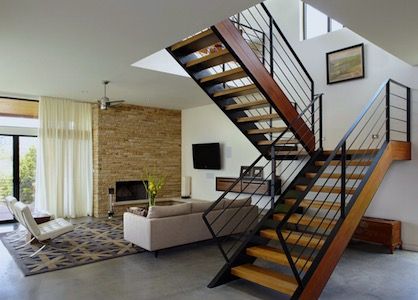 Traditional townhouses (AKA row houses or townhomes) are typically situated in urban areas where detached single family homes are uncommon or non-existent. With their narrow width and vertical height, the living space is spread out between multiple levels... Sometimes up to four or more! In some three plus level luxury units, you may even find an elevator.

A townhome is basically a multi-story dwelling attached to one or more additional homes, so they share at least one wall. Buying one may include the land (fee simple), unlike when purchasing a condo. Buyers of fee simple townhomes often have more loan options (such as FHA financing), since they're not classified as condominium ownership. This often increases their appeal to first-time home buyers who are seeking low down payment financing.

The townhome predates the automobile, and the small footprint of the home allows it to be within walking distance of business & industrial areas. Yet, luxurious enough for the affluent residents of the city. Communities of townhomes are often found throughout large cities such as New York, Chicago, Boston, Atlanta, Philadelphia, Washington DC, and San Francisco. A brownstone is a particular variety, typically found in New York.

Common Characteristics & Features Of The Townhouse

More About The Townhome

With their city locations, purchasing a traditional townhome can be quite pricy, yet if you’re able to afford one, the benefits of being in the heart of the city are priceless. The townhouse condominium is also quite common in the suburbs, but unlike traditional townhomes, they typically come with amenities, such as pools and tennis courts, which requires homeowner association fees to maintain these common areas.

They can be ideal for a family due to their spaciousness and multiple levels. However, seniors may not like them because of all the stairs. Especially when it comes to older units, a traditional townhouse should be thoroughly inspected prior to purchase. Unlike a condo, the homeowner is often responsible for the majority of the unit’s exterior maintenance. For this reason, it’s important to understand what is covered by the association, and what is the responsibility of the homeowner.

With regard to renovations, you’ll want to check to see if the townhouse is in a landmark district or located in a community with architectural restrictions. If so, you'll need to submit a formal request to make changes to the exterior, and sometimes with changes to the interior. Homeowner’s associations typically have a list of standard colors, materials and selections that can be used when remodeling or making repairs. In addition, there may be an architectural review committee (ARC) that will review, then approve or deny a homeowner’s request to make changes to their unit.

The townhome ranks high on the list of investment choices for many buyers, because the potential of earning profits from these houses as rentals is enormous. Just make sure to verify whether or not there are rental restrictions, as many communities have waiting lists for rental eligibility. The number of homes that can be rented is often capped between 10%-25% of the total number of units, so the list can fill up quickly. Regardless, owning a traditional townhouse is an ideal way to enjoy the excitement of the big city knowing the comfort of your very own home is just steps away.